He Should Have Known

What do Baitullah Mehsud, Osama bin Laden, Anwar al-Awlaki, and Isoroku Yamamoto have in common?

Eleven years ago today, I was chairing a conference on unusual applications of geophysics at a large geophysics convention in San Antonio, Texas. I had just given the keynote talk in a room with about 1,500 people in it when my co-chair, Chris Liner, handed a piece of paper to me. His hands were shaking. It said that “planes had hit the World Trade Center and both towers had collapsed”. This did not compute with me: they were HUGE towers. A small plane had crashed into the smaller Empire State Building in the 1930’s and just stuck in the side. Chris asked me what we should do? I stood up and announced to the audience what we had just read, and said that the session would continue - but for people with family in that area to please feel free to step out and try to get in touch with them. I then excused myself, and after 9 tries finally connected with Louise, and learned that it was a lot worse than I had thought. She was still trying to get out of Washington, DC – her office was a block and a half from the White House - and had been walking in huge crowds for 2 hours already. She now considers the passengers on Flight 93, who forced down their aircraft near Shanksville, PA, as saviors.

The rest of my story is like most other peoples’: After three days of staring at the Trade Towers collapsing over and over and over again on TV, I bought an American Flag tie, and took a taxi to the airport for my flight home. I soon realized that I was not going to be able to fly home. I walked out to the Hertz desk and the agent kindly offered me a car, said there would be no drop-off charges, and I started driving. It took me seven hours just to get out of Texas. Every two hours I would get a call from my Palestinian-Saudi son-in-law… who was worried about me. I was worried about him. No, people were not giving Hamed a bad time, in fact if anything they were being overly-protective of him in his home town of Charlotte, NC. The phone-calls depleted my phone battery, however, so I stopped in a Radio Shack to get a car-charger, and struck up a conversation with a police officer. We talked about our respective training in dealing with people wielding knives. Neither of us could believe that people were cowed by half-inch box-cutter blades into being passive sheep and waiting to fly into a building. “THAT’s not even a KNIFE!” he said, angrily.

I was full of anger. It kept me awake for 20 hours, until I finally stopped in eastern Tennessee, figuring I was probably becoming a danger to other people on the road by now. That anger got me all the way home – but then it stayed with me. How DARE someone take advantage of and then abuse our national hospitality to attack us, murder nearly 3,000 innocent people, for…what? Salifist jihadism? Why was it so important to be like the Old Ones (what Salafi means)? What could possibly make it important enough to murder 3,000 innocent people? There are harsh words for people who murder innocents - right in the Qu'ran.

Before anyone attributed the truck-bomb attacks in Kenya and Tanzania in 1998, the name “bin Laden” came to my mind. I had probably walked past him in the late 1970’s in the souq in Jeddah, Saudi Arabia. I fancy that I had seen a tall, slack-jawed young guy who wore the red-and-white Saudi style shmaugh on his head but without the black aighal to keep it in place - to be just like the prophet Mohammed. I had camped with my children in the Asir region, the high scarp mountains of western Saudi Arabia, where 11 of the 19 hijackers had come from. I had seen the hatred in the eyes of the aighal-less Muttawah, aimed at me, a non-muslim. These religious police gave me and my family looks that could kill, as they herded unwilling young men into the mosques at prayer time. I couldn’t comprehend that hatred then, and I don’t understand it now.

For years, however, the ‘righteous anger’ stayed with me. I would clip out news headlines that had anything to do with bin Laden and 9/11. I have a stack in the map-drawer in my office. I read every entry in The Long War Journal, memorizing names, keeping track of all the 3rd-in-commands in al-Qaeda who seemed to last about two months on average. Ah… they finally popped the murderous Beitullah Mehsud with a Hellfire missile. Al-Awlaki was another one of those persistent, "Let's you and him fight" kind of guys, but he met his own Hellfire last year, not long after the SEALS shot bin Laden in the eye.

Yesterday I was reading “No Easy Day,” about the Navy SEAL team who flew to Abbotabad, Pakistan, and in 35 minutes assaulted bin Laden’s compound and then flew his body back to Jalalabad, Afghanistan. Two things stuck out to me: (a) how quick and efficient - and inexorable - the assault had been, and (b) that bin Laden encouraged thousands of people to commit suicide, to become shaheed, martyrs. A rather large percentage of these martyrs have been 12-to-14-yr-old boys. Someone else's children. But when the SEAL’s assaulted his compound, he was the only male present who did not take up a weapon and try to fight. He never touched his AK-47, nor his Makharov. They were found in easy reach, but not even loaded. When it came down to it, bin Laden didn’t have the courage to man up to what he had preached to his poor followers.

The anger finally left me.

How does Yamamoto figure in the title? Isoroku Yamamoto (1884 – 1943) was a Naval Marshal General, the commander-in-chief of the Japanese Combined Fleet during the decisive early years of the Pacific War, and was thus responsible for major battles such as Pearl Harbor and Midway. He died during an inspection tour of troops in the Solomon Islands when his aircraft was shot down during an ambush by American P-38 Lightning fighter planes. His death was a major blow to Japanese military morale during World War II.

He should have known.

Yamamoto was not a bad man. He had opposed the invasion of Manchuria in 1931, the subsequent colonization of China (1937-45), and the 1940 Tripartite Pact with Nazi Germany and Fascist Italy. As Deputy Navy Minister, he even apologized to United States Ambassador Joseph C. Grew for the bombing of the USS Panay in December 1937. These issues made him a target of assassination by pro-war militarists. In 1924, at the rank of captain, he was part of the Japanese delegation visiting the U.S. Naval War College. Afterwards, he toured the industrial heartland of the US. When the militarists forced the confrontation with the United States, which by then was embargoing fuel oil supplies to stop the expanding imperialism in China and southeast Asia, Yamamoto argued that they would awaken a sleeping giant. He said that Japan would not win this war. His argument did not prevail, of course. However, he was right in the end.

Anwar al-Awlaki, like Yamamoto, had spent time in the United States, had been welcomed, treated with courtesy. Like Yamamoto, he should have known. Bin Laden had spent a large part of his waking hours from 1996 onward studying the United States. This was the country that had landed a man on the Moon, and later obliterated the 4th largest army on the planet – on the other SIDE of the planet – in just two weeks in 2003. 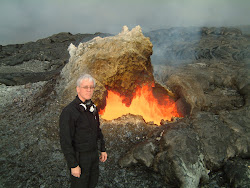